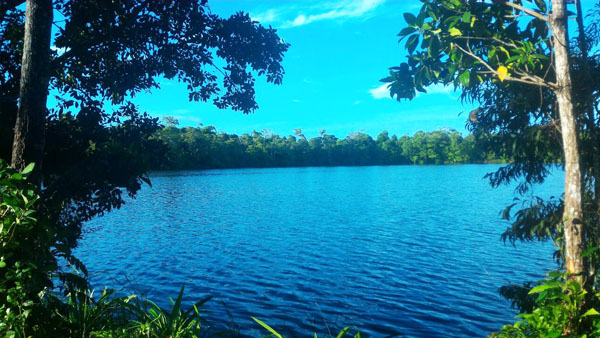 One of the most popular vacation spots in Kei Islands is Tual City. As for reference, there is a nature spot called Waren Lake. The location is in Ngadi Village and it belongs to North Dullah District. Due to its easy accessibility, many tourists are likely to drop by in that location. That means the lake becomes in the list of the most recommended vacation destinations in Kei Archipelago. Most visitors come to the lake for either fishing or enjoying the serene nature. Not to mention the weather is quite nice there.

The Nuance
What makes Waren Lake popular? The best feature is definitely the water, which is calm and stunning. Several fishes live in it, so tourists have an opportunity to go fishing and catch some of them. The next great feature is the lush trees and plants, which surround the lake. These things create a comfortable nuance in it. No wonder, the lake also becomes a good location for relaxation. Some locals even take advantage of the lake to find inspiration and photography.

Exploring Waren Lake
Located in North Dullah District, tourists can easily reach the lake. In fact, it takes no more than 1 hour from Tual City. When it comes to the best activity in Waren Lake, tourists would like to enjoy its nature. It is because the lake is surrounded by shady trees, which act as a protected forest. Not to mention the lake water is fresh and clear, emitting a soothing ambiance. That means relaxation and self-reflection are the most common activities in that lake.

Next, it is related to photography. Any passionate photographers would love to spend hours in the lake. It is because they want to find some best objects and backgrounds for photography. These include the water, trees, branches, wandering fishes, and much more. The thing is tourists should come to the lake at noon when the weather is nice. Taking pictures in the midst of the rain is not a good idea, isn’t it? Also, the quality of the camera has a significant impact on the results. It’s common sense.

Another interesting activity is fishing! Waren Lake is a suitable spot for those who love such activity. As long as visitors carry a fishing rod and some good bait, they are able to catch plenty of fishes there. Now everyone knows the role of the lake in tourism. However, there is another important function of the lake, especially for the locals. It is said Waren becomes the source of fresh water and supply for nearby villages. It is because the locals have difficulties in getting water from wells due to the harsh climate.

How to Get There
The question is how tourists can reach Waren Lake. From Jakarta, take an airplane to Dumatubin Airport, which is located in Langgur City. Next, it is time to reach Tual City and North Dullah District. From there, the last destination is Ngadi Village. In this case, tourists can take advantage of any local transportation service.