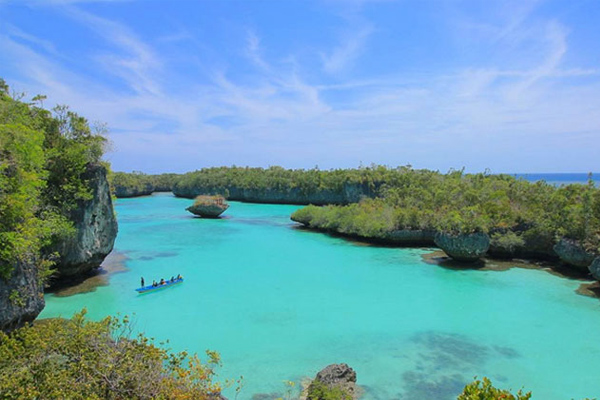 Almost all passionate travelers have heard about Raja Ampat, which is located in Papua Province. However, you don’t have to go to such location to enjoy the similar beauty and nice environment. It is because Southeast Maluku Regency also has such kind of attraction, which is Bair Island. Despite lacking popularity, the island is considered a gem of Maluku Province’s tourism. It offers a flawless nautical beauty and serene environment. Most of the visitors come to this location for sightseeing, playing on the beach, relaxation, and photography.

The Nuance
The green Tosca seawater appears similar to that of Raja Ampat. Not to mention the island offers great shorelines with their stunning scenery. In the beach, some traditional boats are scattered so tourists are able to ride on them. If you don’t like such activity, you can simply walk around on the beautiful white sand. Also, a formation of coconut trees is situated near to the seashore. This is only the beginning, as you can get in the water and swim comfortable. It is even possible for snorkeling, as the visibility is superb.

Exploring Bair Island
The most interesting tourist spot in Bair Island is the bay and there are two of them. In these bays, tourists are able to enjoy clear and calm seawater. The color is blue and it is surrounded by mangroves and rock cliffs. All of these features may hypnotize anyone who visits the bays. So, what’s more? The island is also famous for its hidden beaches, on which tourists can explore during the low tide. In those coastal areas, it is even possible to witness a famous species of shark called Blackpit Shark. Now, that’s a stunning thing!

Once you explore both the bays and beaches in Bair Island, it is time to take some pictures and selfies in different locations. Thanks to numerous beautiful objects in this island. Tourists would be able to capture beautiful moments and a memorable holiday with a mere camera. Next, it is time to enjoy water sports as the seawater is quite tempting. Getting on Jet Ski and canoe is a good idea, as you can find such kind of facilities near to the beaches.

As for the tips, anyone should carry and wear a sunblock prior to going to the beaches in Bair Island. It is because the weather can be quite hot in the afternoon. Carrying snacks and drinks is allowed, but you should never litter. When it comes to the best time to visit the island, it is between March and August. Why is that? The waves are not quite strong during those times, so tourists can explore and do many things comfortably in the sea.

How to Get There
In order to reach Bair Island, it takes a trip to primary checkpoint – Tual City. From Jakarta, you can take an airplane to Dumatubin Airport located in Langgur City. From there, take a minibus or taxi to Tual and Dullah Village. This is the meeting point for those who want to cross to Bair Island, after all. From the port, take a speedboat to your last destination and it may take about 30 minutes.