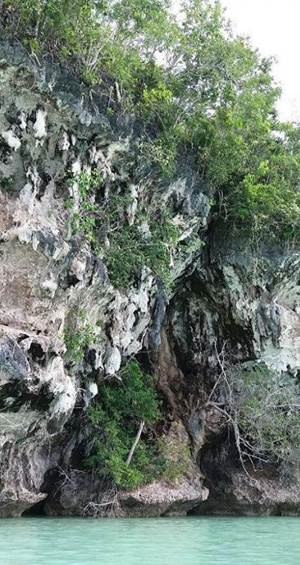 Many hidden gems are worth visiting in Southeast Maluku Province. For example, it is Luvat Cave. The thing is Luvat is not a regular cave, as it features ancient hand paintings made by the ancestors of Moluccas. Travelers would likely to visit and explore the cave due to those beautiful things. In fact, some experts come to the cave for studying and researching. This fact makes Luvat a worthy nature tourist spot in Maluku Province and becomes a site for numerous studies.

The Nuance
From the outside, the cave doesn’t emit a special aura. It looks like a regular cave with plain features. However, the main attraction is located inside the cave. The walls are covered by ancient hand paintings of those who once lived there. These paintings have different shapes, including arrows, sun, boats, and animals. All of these represent the Megalithic Era, after all. At that time, the locals had not recognized the term of deity and lived under animism belief. Those paintings also represent the connection between the ancient society and nature.

Exploring Luvat Cave
The first thing to learn about the cave is regarding the history of it. Either the locals or tour guides would tell tourists about it, actually. In the past, Moluccas (people of Maluku) were mostly nomads. That means they always tried to find a new shelter or a cave for avoiding bad weathers and wild animals. At that time, their primary activities were hunting and gathering. Not to mention they used a cave as a primary protection and stored foods. Luvat Cave was one of them!

The paintings in Luvat Cave are not only simple hand stamps, but they also hold several meanings. Due to their uniqueness and history value, the paintings attract more visitors over time. According to the experts, those were created based on an ancient belief. That means it is more than an artistic purpose, trying to connect with the mystical realm. The experts also said the purpose of the creation of the paintings was to look for blessings and to get what they want through those arts.

Today, Luvat Cave holds an important culture and historical value. No wonder, different kinds of people keep coming to explore the cave. These include tourists, researchers, and photographers. Not to mention the cave has a religious value, on which local people can give a prayer. It is because some people believe there is a supernatural power surrounding the cave. They even believe some ancestral spirits are living in it. Regardless of the purpose, Luvat would be popular as always especially those visiting Southeast Maluku Regency.

How to Get There
Langgur City is the prime checkpoint for those who want to visit Luvat Cave. From Jakarta, it involves a flight to Dumatubin Airport, which is located in Langgur. Next, it is a trip to Ohoidertawun Village and it may cost about 20 minutes. The distance between Ohoidertawun and Langgur is 9.9 km, after all. When it comes to the flight, it takes about 7-8 hours.