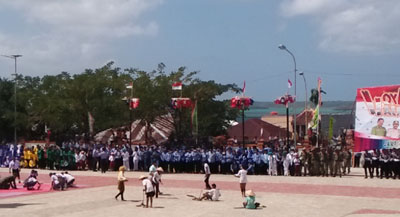 Living in a big city always gives many burdens and stresses. This explains why people choose traveling as their solution to get rid of such issues. In Southeast Maluku Regency, there is Tual City. It is the primary checkpoint for those who want to visit other islands apart from South Dullah Island in Kei Archipelago. Still, Tual is a worthy vacation spot to explore, as many attractions are available there. As for reference, there is Lodar El Square. It is a regular field, which is often used for a ceremony, gathering, sports, and other activities. It also becomes a recommended tourist spot for visitors.

The Nuance
The location is in Masrum Village and it belongs to South Dullah Island. Lodar El Square is considered a perfect place to enjoy sports and relaxation. In the morning, the locals often come to the field and do jogging. In fact, they also come in the afternoon. That means most people are mostly seen in those times. In terms of size, the field is not quite big. It features several trees and some spots for relaxation, as well. In special days, this location is used for a ceremony and performances. Overall, Lodar El has numerous functions, especially for tourists.

Exploring Lodar El Square
Not all tourists know the existence of Lodar El Square. It is because they are likely to visit beaches, lakes, and mountains when spending a holiday in Kei Islands. However, the field becomes a casual vacation spot, especially for those who want to relax and enjoy numerous fun activities. As mentioned before, the square can facilitate sports lovers. Jogging is the most common thing to do there. In this case, the best time to visit Lodar El is either in the morning or afternoon, when the weather is nice.

Apart from sports, people come to Lodar El to relax. That means it becomes a checkpoint to replenish stamina during a tour to Tual City and nearby tourist spots. The comfortable nuance and shady trees make that place more soothing and tempting for tourists, for sure. Not to mention some food vendors are seen in the afternoon, selling local snacks and drinks to visitors. Some of them even offer souvenirs to tourists! With affordable prices and excellent qualities, those vendors become an important part of the square and everyone can take advantage of them.

Another interesting thing about Lodar El Square is the existence of special performances and ceremonies. It is because the local government often throws a performance and entertainment in order to attract more visitors to that location. Usually, it is done to celebrate the birthday of the Nation’s Army. Not only it is available for locals, but it is also open to outsiders. That means everyone is allowed to join such event, including foreigners.

How to Get There
For those who come from Jakarta, the best transportation is an airplane and the first checkpoint is in Langgur City (Dumatubin Airport). This trip takes about 7-8 hours, depending on the weather. Once they reach Kei Kecil Island, the next destination is Tual City. It takes only a few minutes to reach Lodar El Squre, actually.