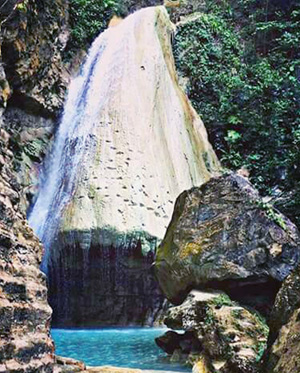 Hoko is one of the villages, which is situated in Kei Besar Island. It also becomes the home of a wondrous tourist spot called Ohoi Hoko Waterfall. With a simple trekking to the waterfall, tourists can reach such beautiful falls and enjoy its beauty. Not only the waterfall offers nature beauty, but it also emits a serene atmosphere. Not to mention the sound of gurgling water is quite mesmerizing. Another good thing about the waterfall is the number of visitors. Not many people come to this location, so the nuance is definitely peaceful. It feels like spending a holiday in private falls!

The Nuance
In terms of size, Hoko Waterfall is not quite tall. Though, the water flows simultaneously and beautifully. Nature pond is located under the falls, on which visitors can swim. In fact, it becomes the prime attraction of the fall. Such fresh and crystal clear water are indeed rejuvenating, so everyone is able to replenish their stamina right away. Another feature is the rocks, which are scattered near to the pond. Usually, tourists would jump from those rocks into the water. It is quite safe, after all.

Exploring Ohoi Hoko Waterfall
The sound of gurgling water is relaxing, and the weather is comfortable. Due to this reason, Hoko Waterfall is popular among those who want to enjoy nature beauty. Some people even come to this tourist spot for finding peace! Regardless of the purpose in visiting the falls, visitors must know several things. For example, it is related to the condition of the land. In the rainy season, some parts of the location are slippery and it becomes dangerous. Not to mention the pond and water will be more extreme, so swimming is not recommended during such time.

When exploring Ohoi Hoko Waterfall, it is true weather becomes the primary consideration. However, there are other tips like carrying extra clothes. Almost all visitors come to Hoko Waterfall to get in the water and play in the rejuvenating pond. It is likely everyone would wet their clothes, so carrying some extras becomes common sense. Here is the thing. Since there is no nearby toilet, tourists might change clothes in the midst of nature.

Next, it is related to the wild animals. Even though Hoko Village is considered a safe settlement, there is a chance meeting wild creatures like “kucing hutan” and hornets. As long as tourists pay attention to their surroundings, it is safe to explore the falls. Another tip is the best time visiting Hoko Waterfall, which is in the morning. It is because the temperature is refreshing and the nuance is foggy. Isn’t that great?

How to Get There
As mentioned before, such beautiful waterfall is located in Hoko Village. It belongs to Kei Besar Island, in fact. In order to reach the location, travelers should head to Kei Kecil Island and the prime destination is Langgur City. Next, it is Tual City and it is the spot to ride a ferry and head to Kai Besar Island. Lastly, travelers only need to head to Hoko Village.