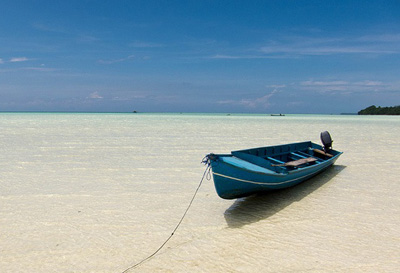 It is true Southeast Maluku Regency holds tons of appealing beaches and oceanfront. One of them is located in Kei Kecil Island, which is called Ohoidertawun. The name derives from the location – Ohoidertawun Village, after all. This coast is famous for its white sand and comfy atmosphere. Not to mention it has the longest low tide as compared to other beaches in Maluku and the locals call it “Meti”. Apart from that, tourists keep coming to this beach to enjoy its stunning shorelines and magnificent underwater scenery.

The Nuance
As mentioned earlier, Ohoidertawun Beach has soft and comfortable sand. The color is white and it has a similar texture to that of the flour. That means tourists are able to enjoy beach walking in comfort. Such flawless sand won’t hurt the feet and it feels warm as well. Next, it is the calm and clear seawater, on which visitors can play and swim in it. No trees or plants grow near to this area, though. That means it looks plain but gorgeous.

Exploring Ohoidertawun Beach
The most interesting thing about Ohoidertawun Beach is its stunning sea scenery with its blue sea and white sand. These features make a perfect environment for beach walking, for sure. As for extras, the warm sunray and breezy wind would rejuvenate everyone’s body. Nothing can compare walking on the beach while enjoying the coastal atmosphere. When it comes to the best time to explore the beach, it is during the low tide or “meti”. At that time, the shorelines turn wider so tourists are able to explore it at its best.

Beach walking is indeed a recommended activity in such beach, but there are other fun things to do. For instance, visitors are allowed to enjoy sunbathing. Thanks to the proper exposure of the sunlight. For kids, the beach is a perfect location to build a sand castle and play football. Some locals even take advantage of the location to look for clams in the sand. In fact, tourists can also join such activity and somehow it helps them get closer to the locals.

The next thing to do is to explore the east part of the beach, on which a coral reef lies. In that location, there are some interesting cave paintings made by ancient people. For some reason, those things emit a mysterious aura and hold important historical value. It can be said there was a life near to the beach back then, becoming a proof that ancient people were dwelling in the cave near to Ohoidertawun Beach.

How to Get There
As mentioned before, the beach is located in Ohoidertawun Village. For those who come from Langgur City, it won’t take much time. The distance is only 9.9 km, so it takes about 15-20 minutes to reach the village. Next, it takes a few minutes to get to the beach. For outsiders, the trip would involve an airplane and the destination is Dumatubin Airport (Langgur).