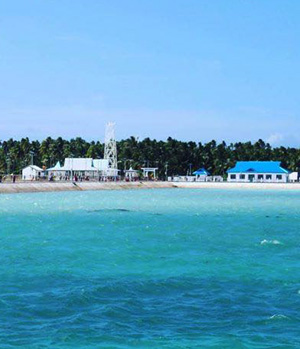 Kei Archipelago is part of Southeast Maluku Regency and it consists of lots of beautiful islands. One of them is called Tayandu Island, which is also called Tahayad. The location is in the west part of Kei Kecil Island and it is famous for its stunning beaches. Most tourists come to this Tayandu for sightseeing and playing water sports. Despite lacking facilities, travelers won’t regret visiting Tayandu as many nature and culture attractions are available. It is also a recommended location for a vacation retreat for those who live in a big city.

The Nuance
As mentioned before, Tayandu Island is famous for its coastal area. That means most tourists would likely to visit the white sand beaches and get in the calm sea water. In fact, many beaches are suitable for swimming as the water is shallow. It is even possible to snorkel and witness the beautiful reefs. What’s more? Another great feature is the local people, whom you can talk to. They are friendly and may teach you their local dialect (Keiese Language).

Exploring Tayandu Island
Tayandu Island is known as a secluded island. Just because it is lacking in facilities, doesn’t mean it would bore you. On the other hand, Tayandu is rich in attractions. For example, tourists have an opportunity to witness local traditions like a wedding ceremony. During the event, the couples wear a Butonese traditional dress instead of Tayandu’s. This is only the beginning, as you can find other types of attractions like historical relics and traditional music. All of them combine into a wonderful culture attraction, so tourists won’t get bored there.

When it comes to traditional music, guitars and drums become the major instruments used by the local musicians. Here is the thing. People of Tayandu got a heavy influence of Arab culture. That means the music is also similar to that of Arab. The musicians often play it during special occasions, especially the wedding ceremony. Apart from music, local dances are also attractive. Both males and females are allowed to perform the dance, in fact. The thing is the local dance in Tayandu is similar to Malay-style dance, which is performed by women.

Men also perform a traditional dance in Tayandu Island. However, the style is a little bit different than that of women. In this case, the men’s dance is influenced by Arabian style. That means only 2 male performers are allowed to dance at the same time. When it comes to duration, it lasts for hours.

How to Get There
There is scheduled water transportation to Tayando Island. Usually, it departs once a week and the main point is Tual or Kur. It is actually a ferry, so the cost can be a little bit expensive. As an alternative, you can ride a small boat provided in some villages. Once you reach Tayando, you can explore the island either by walking or riding traditional vehicles. Also, it is possible to visit nearby islands using a Ketinting (a traditional boat) or a longboat. That’s your call.