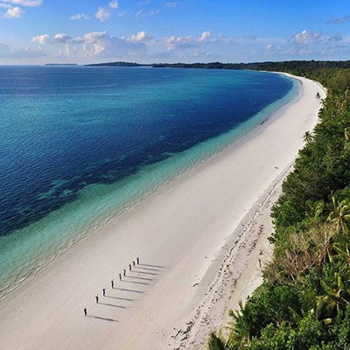 A beautiful island lies in Kei Archipelago and the name is Kei Kecil Island. It is actually the main attraction, on which the capital of the regency lies (Langgur). The other names of the island are Nusyanat or Nuhu Roa, and the size is about 399 km2. It actually has a sibling, called Kei Besar Island. Both of them are attractive, but Kei Kecil has better options of beaches. Due to this reason, more people come to Kei Kecil to enjoy water sports and sightseeing. Apart from that, the island has many options of tourist attractions. That means travelers won’t get bored when exploring the island.

The Nuance
In terms of beauty, Kei Kecil Island is considered top-notch. As mentioned before, the island consists of many beaches. All of them feature white sand, coconut trees, clear seawater, and comfortable atmosphere. Some traditional boats are often seen in the seashore, as well. Apart from these beaches, the island also features some local settlements and facilities. Overall, visitors can easily satisfy their needs when spending a holiday in Kei Kecil. As for reference, there are Ngursarnadan and Madwaer Beach.

Exploring Kei Kecil Island
Beaches are the major attractions in Kei Kecil Island and the most famous one is Ngurbloat Beach. Also known as Pasir Panjang Beach even known among local and foreign tourists. Usually, tourists would explore other beaches after visiting Ngurbloat. The first destination is Ngursarnadam Beach, which is situated near to local accommodations. The location is in Ohoililir Village and it lies in the same area as Ngurbloat. That means you can visit it easily from the previous beach. This beach features white sand and coconut trees, on which tourists can relax.

What’s next? It is Madwaer Beach, which is located in West Kei Kecil District. The location is far from the hotel but is worth a visit. Moreover, a mini bus would bring you to the beach comfortably. The question is what makes Madware Beach is a worthy vacation destination. The answer is the delicious seafood, especially the lobster! That means tourists are able to enjoy the feast while witnessing beautiful sea scenery. Not to mention some local kids are seen playing in the shoreline. What a nuance!

Apart from beaches, Kei Kecil Island is also famous for other nature attractions like Hawang Cave. It is a beautiful cave with a nature pond. Once the sunray shines the pond, it reflects beautifully inside. Still, you need to be careful when exploring the cave as the floor is slippery. It is a basic precaution, after all.

How to Get There
Actually, it is easy to reach Kei Kecil Island. From Jakarta, the simplest transportation is an airplane and the prime destination is Dumatubun Airport, which is located in Langgur City. It may take roughly 7-8 hours, but it is the fastest as compared to other transportation services. If you ride a ferry, it may take days and some checkpoints. Once you reach Langgur, use a taxi or a minibus to explore the island. That’s all.