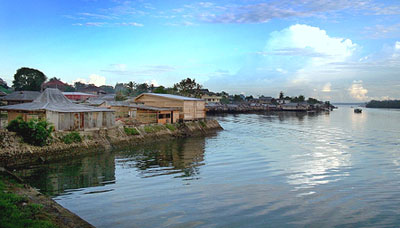 Visiting a beautiful archipelago like Kei Islands is worth a thousand of experiences. The thing is travelers have many options for tourist spots, causing a dilemma and confusion. In this case, Tual City becomes a good choice for them. It is known as the former capital of Southeast Maluku Regency, as the local government has chosen Langgur as its replacement. Still, Tual never disappoints everyone. It has many beautiful vacation destinations to explore and it becomes has a significant port, connecting to other islands. Simply said, any travelers would visit Tual before they are going to other islands like Kei Besar, Duroa, etc.

The Nuance
The fact is that Tual City is located near to Langgur, which is separated by a small strait. Both the cities are connected by a bridge, so travelers can easily access them. In terms of nuance, Tual is quite similar to Langgur in terms of facilities and environment. No wonder, many people call both of those cities as siblings. Despite this fact, Tual has unique attractions and tourism. These become the reason why tourists keep coming and spend a holiday there. Not to mention the atmosphere is quite rejuvenating.

Exploring Tual City
The weather is cool since Tual City features mostly highlands. Tual’s territory also includes Dullah, Tayando, and Ut Island. All of them become an option for tourists and any travelers, who come to Tual. That means visitors have two options of destination, which are the city area and islands area. The second option is more popular, as it features beautiful beaches and stunning island landscape. Not to mention people can go snorkeling and other water sports there. Some people also do photography in those islands!

The next thing to enjoy in Tual City is its culture. There is a famous customary law in Tual, which is called Larvul Ngabal. The locals take advantage of the values of such tradition in order to retain the relation between others. That means they might live by helping each other and retain the peaceful environment, regardless of the location. They also apply Sasi Tradition. That means they put certain limits in how to cultivate natural resources like fishes and crops. This way, they can avoid things like greediness and harmful nature exploitation.

Another lure of Tual City is the local people. Most of them are the natives of Kei Islands, which is called Kei Tribe. The others are new incomers, who introduce modern culture to the locals. These include Bugis, Javanese, and Makasar People. Still, all of them are quite friendly and often introduce their local foods and culture to tourists. In fact, some of them allow travelers to spend a night in their house.

How to Get There
For those coming from Jakarta, the trip takes about 7-8 hours using an airplane. The destination is Langgur City, where Dumatubin Airport lies. From there, take a taxi or minibus to Tual City. This trip won’t take much time, as the distance is quite near. As long as they use the right vehicle, the trip won’t be burdensome.