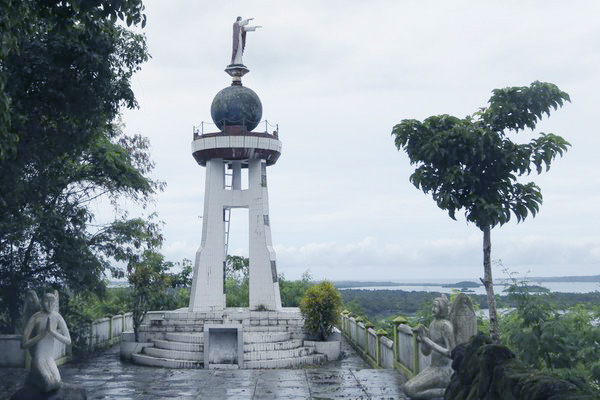 Religious tourism offers the same attraction as nature tourism. It is a fact. The question is where travelers should visit when spending a holiday in Southeast Maluku Regency. As for reference, there is Masbait Hill. The location is in Kelanit Village and it belongs to Kei Kecil Island. Tourists are able to reach the location from Langgur City easily, as it takes only a few minutes. The thing is this location is mostly visited by the Christians and Catholics. Still, it opens for everyone regardless of the religion.

The Nuance
The fact is Masbait becomes the highest hill in Kei Kecil Island, featuring breathtaking scenery and rejuvenating nuance. The prime feature of the hill is the Jesus Monument. The Christ stands on a globe, which means he might protect everyone living in the island. There are also several statues scattered nearby, posing like praying angels. They have wings, after all. When it comes to the environment, the hill is surrounded by bushes and shady trees. This explains why the atmosphere is quite comfortable there.

Exploring Masbait Hill
Being the highest hill in Kei Kecil Island, Masbait is quite famous. Not only it is popular among the locals, but it is also well-known among outsiders. Despite the tiring climbing, visitors won’t regret reaching the top of the hill. The path is called “Jalan Salib” or the Divine Path, on which tourists can explore. Not to mention the hill has the Jesus Monument, which is considered a blessing for the locals. With all these features, most of the visitors come to the hill to give a prayer. They are mostly Christians and Catholics, actually.

It is undisputed. Masbait Hill becomes a recommended tourist spot for religious tourism or pilgrimage. However, tourists have another reason to reach the hill. It is to enjoy the breathtaking nature scenery from the top of it. The nearby islands are seen well from there, after all. Another motive is to enjoy the sun views, including the sunrise and sunset. Somehow, the hill offers a romantic nuance to visitors, especially couples. Thanks to the serene and comforting atmosphere.

The next interesting spot is in the foothill, on which Maria Cave is located. In this spot, tourists would give a prayer and rest before reaching the higher spots. Another good thing about the hill is related to the affordability. Tourists don’t need to spend any pennies to enter this location, especially during working days. However, some keepers might be there during holidays and they charge visitors some money. It is not a big deal, though.

How to Get There
The fact is Kelanit Village is situated near to Langgur City. That means it is going to be a short trip! The distance between Langgur and Kelanit is only 6.3 km, so it takes approximately 10-15 minutes to reach the location. The problem is tourists should climb a bit in order to reach the hill, as it is located on a highland. Have no worries. It is a worthy effort, as the reward is satisfying.