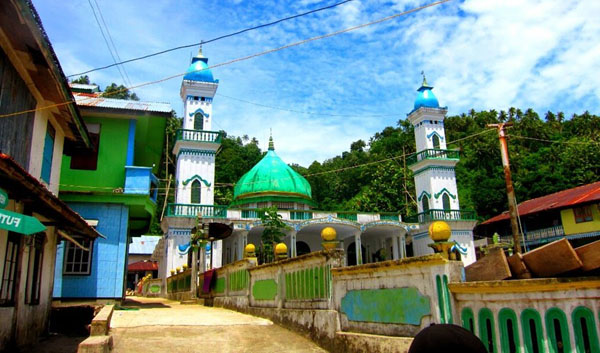 It is true that Southeast Maluku Regency is rich in nature attractions and culture. For those who are into local cultures, there is a good vacation spot called Banda Ely Village. This settlement is situated in Kei Besar Island and belongs to Kei Archipelago. As the name suggests, it is the home of Banda People. They came from Banda Island to Kei Besar Island in 1621 during the war against the Dutch. Today, the village becomes tourists’ vacation destination for its culture and arts. These include the local dance, music, and handicrafts!

The Nuance
In terms of nuance, Banda Ely Village looks traditional and simple. It is because the people keep retaining their culture and values. That means they are not influenced by the modern culture at all. Some of their houses are even located near to the water because they work as a fisherman. No wonder, several fishermen boats are also located near to those houses. In a special event, the locals use the boats to explore the water and perform a merry festival! Moreover, the village is located near to Ar Mountain and a beautiful beach.

Exploring Banda Ely Village
Most of the visitors come to that village to learn its history. According to the locals, Banda Ely Village was formed by Banda Community living in the eastern part of Indonesia. No wonder, most villagers retain their culture and arts well. For tourists, those traditions become a significant attraction. One of the best local traditions of Banda Ely is the folk song, which is called Onotan Sarawandan. The song describes the adventure of the ancestors in the past for finding missing relatives.

Next, visitors can make new friends with the locals. The thing is those often talk local language, which is called Veveu Evav. That means it is a little bit difficult to talk to them without a local guide or an interpreter. For lucky tourists, the locals might offer their room for a night. It is a big help for backpackers and those who can’t find any accommodations when visiting the village. Kei Besar Island doesn’t have many hotels, after all.

Banda Ely Village is also famous for its traditional handicrafts, including silverware and earthenware. With enough money, tourists can buy those valuable items. It is even possible to bargain and get better prices of those beautiful objects. What people need is a good communication and persuasion skill. It helps them win the best items with the cheapest price!

How to Get There
It is a long trip to reach such village, as it involves many checkpoints. From Jakarta, the prime destination is Langgur City. Once tourists reach Kei Kecil Island, it is time to reach Tual and ride a ferry to Kei Besar Island. From there, the last destination is North-East Kei Besar District. The thing is there is a limited option of accommodations and transportation services in Kei Besar. In this case, tourists can look for hotels in Kei Kecil or sleep in a villager’s house, as long as with their concern.